The driver chattered on his cell phone as the wheels of our jeep bounced over rocks barely a few feet from a sheer vertical drop. Across the ravine lay the rusting remains of the last jeep that had fallen off the mountain, and haunting our thoughts was the report of a bus that met a similar fate just a few weeks ago.

I comforted myself in the knowledge that jeeps, being much more maneuverable than busses, rarely fall off these mountain roads. 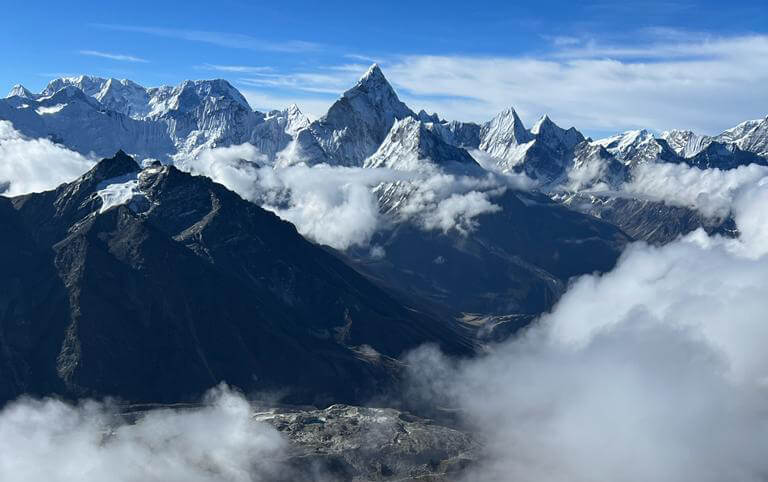 We reached a place where the ravine opened up, allowing less-steep terrain upon which the villagers had carved terraces for farming. "Let us go meet some of the orphans." Harsh mountain conditions combined with constant mountain trekking gave Brother Daarul the physique of an Iron Man contestant. He bounded up the slope toward a village hut. Grabbing the camera backpack, I urged Sumit to hurry and went after him, thankful for a chance to stretch my legs and lungs.

By the time I arrived, Daarul was talking with the wizened lady who appeared to be at least a centenarian but who I later learned was just 50. The children were pitifully dirty. Clad in rags, they stared at us with empty and questioning eyes.

"What is their situation?" I inquired in Hindi.

"Their mother is dead," said the pastor. He motioned to the older woman. "They are being cared for by their grandmother."

"No other relatives are alive or willing to care for them?"

"Their father was the driver of the bus that crashed. Now the whole region blames him and his family for bringing the curse of death on all the passengers who also died in the crash."

I gasped. There were no words to describe the sense of tragedy that hung over the little hut.

We had to keep going as we must reach the village by evening. Back in the jeep, we 4-wheeled through a rushing creek and in barely 15 mn had reached another village. There again, we stopped. A woman and two small children welcomed us into another home, built of thick mud walls with heavy wooden rafters. We sat and talked as she prepared lunch for us on a wood stove. Here in the village, people eat what they can grow in their fields or what their cattle, goats, and chickens produce. There is no such thing as a supermarket. When there is rain, they get fresh vegetables. When there isn't rain, which is most of the year, they subsist on what they can dry or store in bags - rice and beans.

The mother offered us tin cups filled with what appeared to be curdled milk. Upon daring to imbibe a spoonful, I was thankful to discover it to be a tad sweet, sort of like lumpy yogurt. Then she served us bowls of a YUMMY soup made with big red beans and some other vegetables, sopped up with coarse unleavened bread roasted over the flames. YUMM! But my enjoyment of the meal was cut short when, during the talk, the woman gestured toward the ceiling beams and said, "That is where my husband hung himself last year."

The cute little boy and girl who played about their mother's skirts were now semi-orphans. Without the family's chief breadwinner, this uneducated mother now had very little means of earning an income. The children faced a bleak future of illiteracy and poverty.

WIN would like to find sponsors for 22 orphan and semi-orphan children in these remote villages ($50/month/child). Your sponsorship of WIN can save a child from the misery of an empty stomach and illiteracy, providing both good food and basic education.