Faith over Fear, Cure over Covid

A teenage girl strolled along a path in the Minnesota woods enjoying the sweet forest aromas of spring; tender new grasses and ferns bent with droplets kissed her jeans and arms with the remnants of the night’s rain. As the moist earth cushioned and muffled each step of her sneakers, the tranquility, the budding life, and pristine freshness filled her heart with peace as she drank-in the lush aromas.

Symba was enjoying the hike as well, but in his uniquely canine way - dashing about in hot pursuit of rabbits, mice, or every tantalizing smell. Occasionally he returned to her, tongue lolling, golden Collie face grinning as best a dog can grin, his wagging bushy tail trailing entangled remnants of dry blackberry brambles. Then, up went his ears, and with a "ruff" off he bounded on the trail of another humanly inaudible sound.

On one side of the path along which the girl ambled grew birch and aspen trees. On the other side was dense underbrush. As she walked she was suddenly aware of a rustling sound from the thicket – it seemed only a few feet away from her! Continuing to walk she looked into the thicket to see what made the sound - thinking to see a squirrel or chipmunk scurrying about. Suddenly her heart froze as her eyes made out a dark shadow moving in the darker shadows of the thicket. The living creature tracking her was no mere rodent, but a hungry bear just out of hibernation!

Adrenalin turned the girl’s feet into wings, and hardly touching the ground in a split second 50 yards separated her body from the menace lurking in the bushes! Then she remembered, "Don't run from a bear. Stand your ground!" She stopped running and looked back. She had gained distance alright, but the bear was still coming her way, still mostly concealed in the underbrush! Heart pounding in her throat, she thought, "Should I obey the advice to stand still . . . or keep running? What should I do if it charges me?" 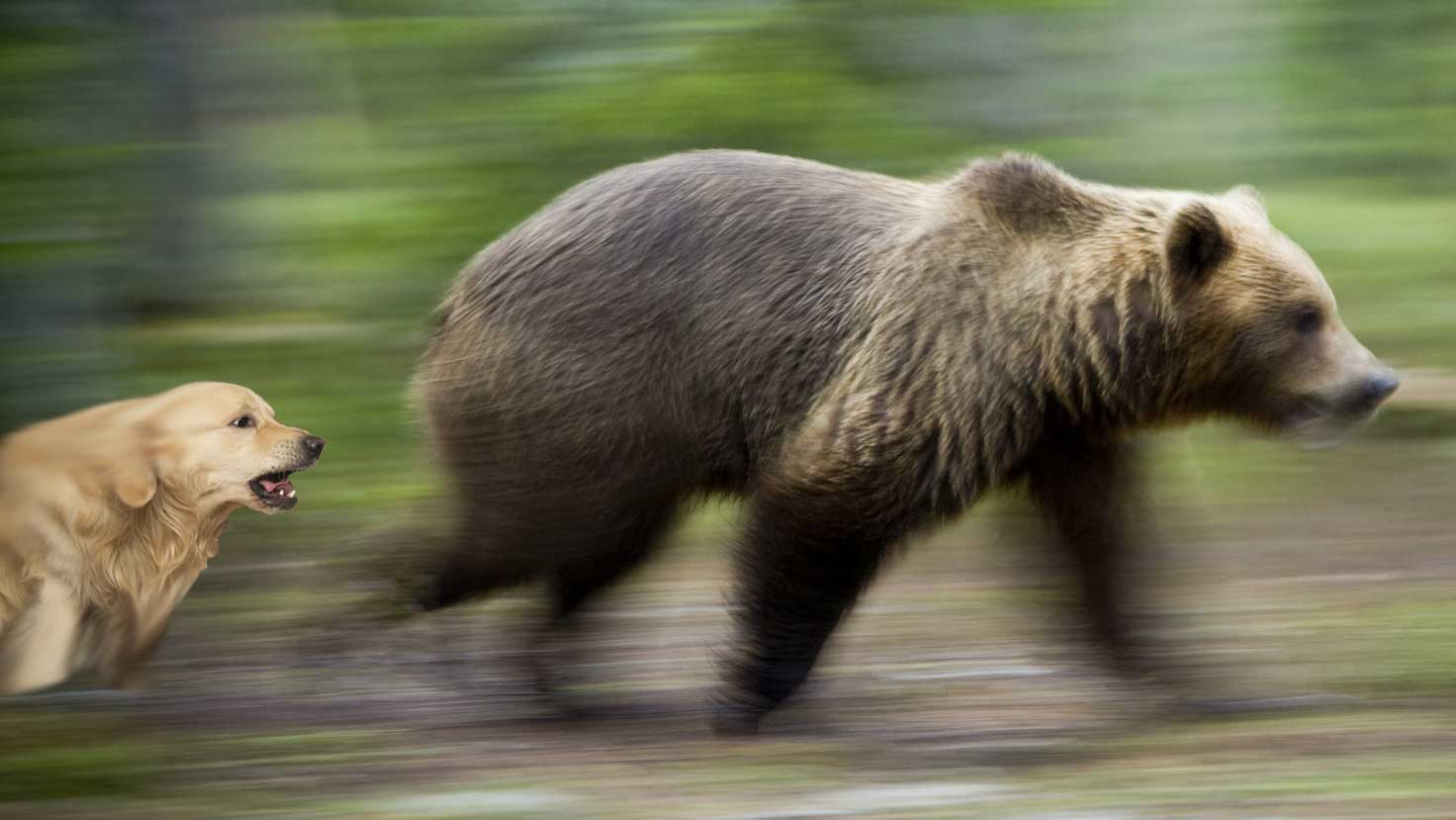 In that instant, Symba, streaked past her legs, the force of his body nearly knocking her down. With ferocious growls and all his Collie hair standing up like a mohawk, he charged straight at the lumbering black shadow! The girl’s fluffy, huggable golden pet had been transformed into ‘the lion’ after whom he was named! Without an ounce of fear he stood snarling and barking with all the fury of the king of the jungle. The bear, assaulted by flashing fangs and an earful of enraged canine, did an abrupt about-face, fleeing as fast as its short legs could carry it. With the dog in hot pursuit, soon the bear had completely vanished back into the forest. That evening Symba got lots of extra petting, and a portion of the best beef trimmings!

The girl in the above true story was me, but today this story is being repeated right now with the human race feeling threatened by something against which we perceive ourselves to have little power. Some people are fleeing in fear, some have horded supplies. Acting in cowardly selfishness, someone yanked a grocery cart from an elderly lady and stole her groceries. People try to break into stores to rob and loot. But the fact is, that this ‘bear’ is not too powerful to be defeated. This ‘bear’ is just another “creeping thing upon the earth” over which human beings have been given dominion (Gen 1:26-28). This is the time for us to take-on more of the courage of my dog.

Symba knew the bear was dangerous, but he refused to believe himself to be powerless! He used what he had. What does a dog have? A loud bark, and vicious-looking teeth, plus agility. Was the bear chasing Symba? No. The dog could have continued his carefree romp in search of a harmless rabbit, but instead he came to the aid of his master. He stepped in and used what he had to protect others. In so doing, he completely vanquished the threat and sent it fleeing.

Right now, many heroic people are being ‘Symbas’, refusing to believe themselves powerless. They are using everything they have to overcome Covid-19. Researchers are working with dangerous substances in the effort to find cures and vaccines. Medical professionals are putting themselves in harm’s way serving those who are ill. People carrying-out essential community service jobs that cannot be shut down are enabling life to go-on for the rest of us. Unfortunately, our media, airwaves, and social networking grant more glory to the ‘bear’ and its possible destructive work, than we do to the ‘Symbas’ who are pursuing the ‘bear’ and moving us every day closer to driving it into oblivion.

Instead of running scared, let us stop and face the ‘bear.” Instead of talking on and on about who is dying, let’s start talking about those who are living, overcoming, getting well and discovering cures! Let us consider the tools that are in our hands to deal with the problem. Humans have been granted “dominion over the creeping things upon the earth.” How shall we exercise this dominion? Here are some steps that, if we follow, I believe will hasten our victory over this pandemic, and in the process also make us better human beings, and the world a better place than before:

1) Replace Fear with Faith. God is in control even when we may not be. Nothing will come upon us of which He is not aware. He is carrying us through this.

“Are not two sparrows sold for a copper coin? And not one of them falls to the ground apart from your Father’s will. The very hairs of your head are all numbered. Therefore, do not fear; you are of more value than many sparrows.” Mt. 10:29-31

“For God has not given us a spirit of fear, but of Power and of Love and of a Sound Mind.” 2 Timothy 1:7

2) Praise God for science. Contrary to what tradition has often taught us, it IS spiritual to THINK! We must thank God for our brains! Human ability to create comes directly from the Creator. Science is ordained by God. We must praise Him who made our brains and beseech Him to grant our brains yet new wisdom to secure dominion over this ‘creeping thing’ called Covid-19. Let’s fix our eyes on the Lord and pray for the researchers, pray for the doctors and the scientists, pray that God will guide them to cures and vaccines.

3) Celebrate the advances toward a cure. Scientists and researchers are partakers of a precious piece of God’s personality and nature – that of the creator. They are looking deeply into the molecules of the microscopic building blocks of matter and combining that which will eventually prove to be a cure for Covid-19. So instead of fixating on fear and turmoil, we should recognize that a heroic and unified effort is taking place as people across multiple nations work collaboratively to find a reliable cure.

4) Shine! Many people are taking this opportunity to demonstrate love, serve, volunteer, or provide a positive word of encouragement. You too can build hope, create community (remotely), promote collaboration, and guide your nation to repentance and realignment with God’s will. In this way you will “shine as lights in the world.”(Philip. 2:15)